Distance: 106 miles
Minimum Drive Time: 3-5 hours
Best Time to Visit: Summer and Fall; Between Granite and Anthony Lake (D to F) the road is often closed until July due to snow.

This 106-mile loop is a voyage through gold booms, ghost towns and the enchanting natural beauty of the Elkhorn Mountains. 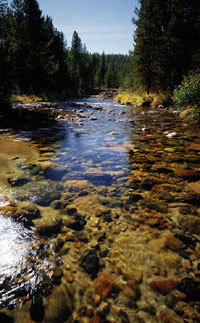 In the late 1800s, Baker City was dubbed the Queen City of the Mines. Indeed, many who pushed west on the Oregon trail stopped short of the Willamette Valley in the Baker City area to mine gold. While the mines in the Elkhorn Mountains eventually stopped producing, agriculture and the arrival of the railroad helped Baker City outlive many similar boom towns.

You can tour the city's downtown to see fine examples of turn-of-the-century Victorian architecture, including the famous Geiser Grand Hotel. A five-pound gold nugget is on display at the U.S. Bank on Main Street. To begin your Byway tour, head south on Oregon Route 7.

B. Taking The Powder

Soon, the Byway turns west and joins the Powder River. During good water years, the Powder is an excellent fishery for stocked and native rainbow trout; a half-mile long paved trail offers river access. The river empties into Phillips Lake, which is a popular boating and fishing spot. Nearby, the Mowich Look Wildlife Viewing Area is a good place to spy a variety of wildlife including osprey, bald eagles, deer and elk.

Beyond Phillips Lake, a side road leads to the Sumpter Valley Railroad Park where the restored narrow gauge "Stump Dodger" train takes passengers to the town of Sumpter; the Dodger runs four times daily on weekends and holidays throughout the summer months. The Elkhorn Drive continues west, past fields of dredge tailings (the earth disturbed by mining), to Sumpter. With a population of 130, Sumpter is a shadow of its glory days when miners produced over $10 million in gold ore, and the town had 15 saloons, three newspapers, and an opera house. Though the business district was destroyed by fire in 1917, gold was extracted from the area until 1954. A 2.4 million pound dredge that dates back to 1935 is on display in a park at the edge of town; it's rumored to be haunted by a ghost.

Leaving Sumpter, the Byway climbs to take in dramatic views of the Elkhorns, eventually reaching Blue Springs Summit (5,864 ft.), a popular snowmobiling venue. Ten miles down the road, gold was discovered in Bull Run Creek in 1862, and the town of Granite sprang up. For 80 years, boisterous Granite produced gold and some legendary characters like Skedaddle Smith, One-eyed Dick, and '49 Jimmie, whose only companion was a rooster with whom he shared all his meals. Their stories live on in Granite's abandoned buildings. Before you leave town, be sure to gas up, as no services are available until you reach Baker City. 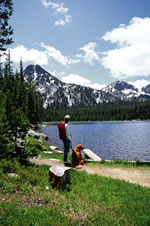 From Granite, the Byway turns north onto Forest Road 73. Look for rock "walls" made by early Chinese gold miners along Granite Creek, as they set aside larger boulders in their search for gold. The Elkhorn Byway soon meets up with the Blue Mountain Scenic Byway at the North Fork John Day Campground. The "Wild and Scenic" John Day River is recognized for outstanding fisheries, water quality, scenery, recreation, wildlife, and historical values, and is a popular destination for outdoor people. The Byway turns east and climbs its apex at Elkhorn Mountain Summit (7,392 ft.). The jagged peaks in view here form the backdrop for the Anthony Lakes Recreation Area.

Within a few miles of each other, Grande Ronde Lake and Anthony Lake offer picturesque settings for camping and fishing, plus cross-country skiing and snowmobiling in winter. The Anthony Lake area is also home to a downhill ski resort that's served up great powder since 1933.

From Anthony Lake, the Byway descends abruptly, capturing superb views of the Baker Valley and the distant Wallowa Mountains. When Forest Road 73 ends in the valley, head south to Haines, the "biggest little town in Oregon" (pop. 370). Visit the Eastern Oregon Museum, which features an extensive collection of pioneer antiques. Continue south on U.S. Route 30 to reach Baker City. 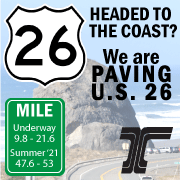 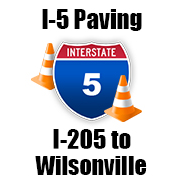 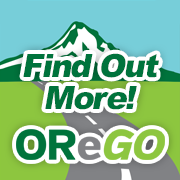